[Finally!] The arrival of QR Codes in Kenyan print advertising.

This has been a long time coming and I was really wondering when it was going to start happening in Kenya. It seems that (finally!) QR codes are catching on in Kenya. Well, maybe not really catching on but lets just say its starting to happen. I was recently in Europe and traveled through a bunch of countries in both Eastern and Western Europe and one thing that was common was the use QR codes on all sorts of advertising. More specifically, you would see QR codes on shop fronts, posters, newspaper ads, magazine ads, billboards, and even napkins at restaurants. Yes, QR codes have gone very mainstream in the rest of the world and as usual Africa tends to lack behind, until now that is, or at least NOT in Kenya?

But, what is a QR Code? In a nutshell (and according to Wikipedia), “A QR code (abbreviated from Quick Response code) is a specific matrix barcode (or two-dimensional code) that is readable by dedicated QR barcode readers and camera telephones. The code consists of black modules arranged in a square pattern on a white background. The information encoded may be text, URL, or other data.” In summation, a QR Code is normally accessed using a mobile phone and when “read” using your phone’s camera and a QR code reader software it takes you to a web site address. This web site address would normally be one that is marketing a service or product, as advertised. I first found out about QR codes around 2 years ago and even did a blog post here on this blog.

So, the reason behind this blog post is that for the very first time (in my knowledge?) I saw a brand marketing in Kenyan media using a QR code. The brand in question is the luxury range of Fairmont Hotels who had a print ad with a QR code in today’s edition of the Business Daily Newspaper as below: 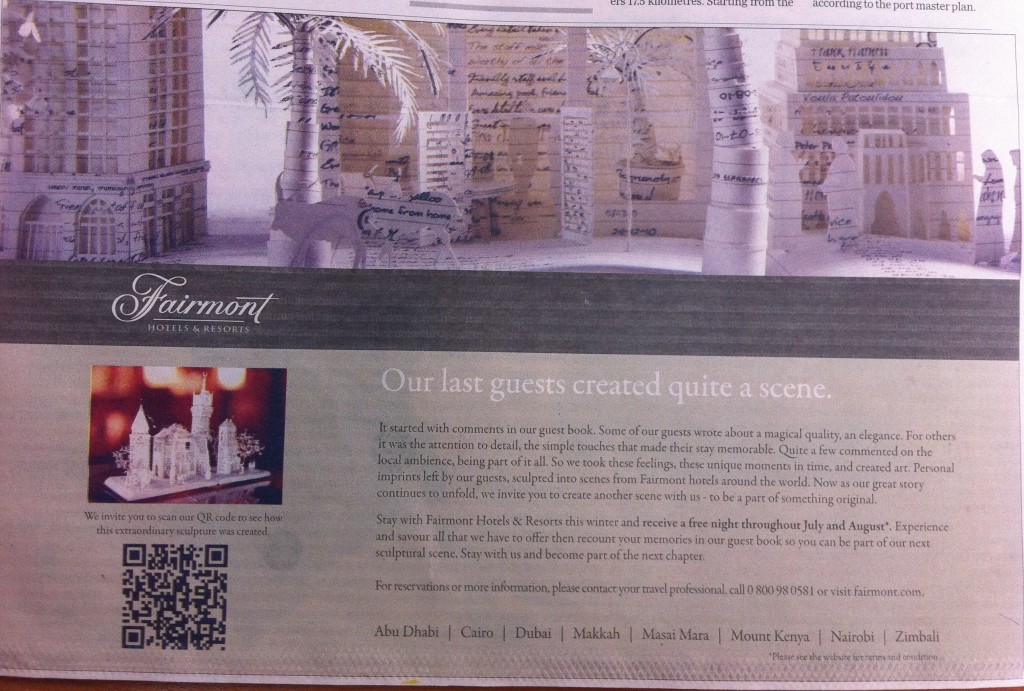 On scanning the QR code, one is taken to the promotional Fairmont YouTube video as below:

Now, the whole promotional campaign by Fairmont using this QR code is indeed global so it’s not one that started in Kenya. However, that they opted to use the QR code in their advertising in Kenya shows that this market has clearly “arrived” from a digital marketing perspective. One of the major caveats (in the pre-broadband past) has been the lack of fast and affordable Internet access as well as (advanced) feature or smartphones that could support such a digital marketing campaign in Kenya – consider the fact that the “destination” at the end of the QR code is a YouTube video and you start to get the picture. So, as a call to action for more local and ambitious brands in Kenya, its time to try some print-to-digital marketing using QR codes, as Fairmont have just demonstrated.

A candid view of [integrated] mobile marketing campaigns in Kenya.

It's time to get serious about digital marketing measurement in Africa.

[Finally!] The arrival of QR Codes in Kenyan print advertising.