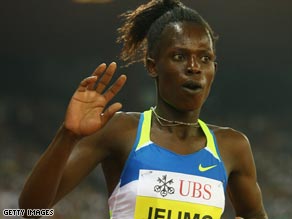 Kenya’s Pamela Jelimo once again proved that she is one of the world’s finest and upcoming atheletes. At only 18 years old, the recently crownedÂ womensÂ 800 meters Olympic Champion demonstrated just how dominant she is at the distance by winning in an impressive time of 1 minute and 55.16 seconds, a meet record and almost four seconds ahead of world champion and fellow Kenyan Janeth Jepkosgei. Pamela won all her six races in th the golden league series which meant she took the entire US$ 1 Million Jackpot when none of the other atheletes competing managed to do the same. Once again, Kenya is really impressing the sprorts world and flying high after the highly successful Beijing Olympics campaign recently where the it was the highgest placed African Country at the the event.Â