The Nokia 3, 5, & 6 Herald The Return of Nokia Smartphones To Kenya

Nokia, Is Back, In Kenya

Nokia is back, in Kenya, with a bang. Yessir! I attended the launch last week of the Nokia 3, Nokia 5 and Nokia 6 which are all pure Android smartphones. Indeed, the back story of Nokia’s rise and fall is a poignant one. Nokia owned the mobile world a decade ago prior to the rise of the iPhone and Android duopoly. I seem to recall when the iPhone came out I was so Nokia loyal that I remember saying I had no intention of moving to the same as I was going for the Nokia N97, Nokia’s flagship at the time. How things change, how they stay the same!

The Nokia brand will always have a special place in my heart as it was the first mobile device that my late mother was able to use to send and receive text messages easily. You see, until you used Nokia mobile device, back in the day, the majority of mobile phones had a really clunky user experience and quite often you struggled to make things happen on them. Nokia streamlined it to such a point that it was actually really easy to use with such innovations as predictive text inputs. Nokia was the default before the iPhone happened a decade ago, and Android shortly thereafter. The rest you could say is history.

Nokia as a mobile consumer brand had been playing in the feature phone market globally after it was acquired by Microsoft. More recently, HMD Global, a Finnish company, acquired the rights to develop and sell Nokia-branded mobile devices across the board including smartphones and tablets. It is under this arrangement that the Nokia mobile consumer brand has re-entered the global marketplace and most recently has come to Kenya with range of impressive Android-powered smartphones! There is some irony to Nokia’s smartphone return given that if they had adopted Android all those years ago as their primary mobile operating system, like Samsung did, I have every conviction it could have stayed as the dominant global smartphone brand to this very day.

I had the opportunity to handle the Nokia 6, Nokia 5 and Nokia 3 last week at the launch in Nairobi. One thing that immediately struck me about all three is the build quality? All three Nokia smartphones seem to have retained much of the original Nokia design sensibilities that makes all things Scandinavian minimalist beautiful. They are all built using aluminium unibodies meaning that they are going to be quite durable whilst retaining their amazingly refined aesthetics. Another thing that caught my attention is the screens on all three mobile devices were remarkably crisp and vivid, a quality that will surely make spontaneous purchases happen.

The pricing and features of the of the new Nokia smartphones is surprisingly competitive! I had expected mid-range to high-end pricing for the new Nokia smarphones but they are clearly going after the Kenyan middle-class market as seen below:

The Nokia 3 is the entry-level smartphone as launched last week. It comes with 8MP autofocus cameras on the back and front, LTE/4G connectivity and a 5 inch polarized HD display with Corning Gorilla Glass. It has a unibody polycarbonate body and aluminium frame. It also comes in dual and single SIM variants which is especially handy in a market like Kenya where dual SIM smartphones are all the rage. It also comes with Android Nougat which is the latest version of Android with 16GB on-board memory which is expandable up to to 128GB using a Micro SD card.

The Nokia 5 is the mid-range smartphone of the range that was launched in Kenya last week and has a seamless aluminum unibody, a 5.2 inch polarized HD display with sculpted Corning Gorilla Glass and the added feature of
a fingerprint sensor for extra convenience. It also has a 13MP autofocus camera on the back with phase detection autofocus, wide aperture and dual-tone flash, and a 8MP camera on the front. Like the Nokia 3, it comes with 16GB on-board memory which is expandable up to to 128GB using a Micro SD card. It also comes with Android Nougat and LTE/4G like the Nokia 3 but also has a large 3,000 mAh battery which means it should last all day between charges.

The Nokia 6 is the top of the range or flagship of all the Nokia smartphones launched in Kenya last week. This was my personal favourite as it just oozes beautiful aesthetics and a quality finish thanks to being seamless precision-milled aluminium from a solid block of metal! It actually looks more expensive than what it costs, which is impressive. The Nokia 6 is what we normally refer to as ‘flagship killer’ in smartphone parlance. The screen alone is worth everything when you see it for the first time. True. Story.

Now, I am not saying that the Nokia smartphones are cheap but they seem to be great value for money given the pedigree of the Nokia brand and also the quality of the devices I handled last week. Indeed, what is pending to reaffirm this point is for my friends over at HMD Global to get me a couple of of the latest Nokia smartphones to review as my daily drivers to really see how good they really are. Prima facie, the new Nokia smartphones are looking especially nice but at the end of the day the proof is in the pudding!

10 Years On, The Past, Present & Future of Safaricom's M-Pesa In Kenya 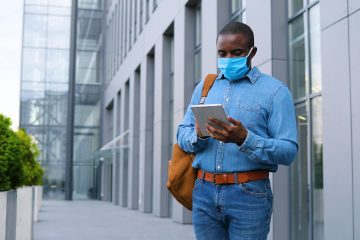 The Nokia 3, 5, & 6 Herald The Return of Nokia Smartphones To Kenya