The funny thing about disruption is that when it starts happening the incumbent often tends to either ignore it completely or hardly pay attention to what is happening, until its too late. However, quite often, the very term ‘disruption’ is misunderstood or misplaced, to begin with. I am a keen observer of consumer trends or behaviours as that can be a strong indicator of where the market is going and not necessarily what a sector or industry thinks is actually happening.

As an example, think back to the time when EasyTaxi first launched in Kenya a few years ago, just before Uber and other taxi-hailing mobile apps became commonplace. I had a taxi guy called ‘Karanja’ who I had used for quite a few years. He was my ‘go to guy’ and at the time he had a ‘network’ of other taxi guys who could pick me and drop me or any of my family members wherever they needed to go. However, the thing is that his service was occasionally erratic and on more than a few occasions I paid the price for that.

I tried EasyTaxi sceptically for the first time. I pushed the button on the mobile app. I waited briefly. The EasyTaxi driver called me to reconfirm my location. He picked me up shortly thereafter. He dropped me where I was going. I paid less than 50% of what Karanja would normally charge me. My taxi commuting life changed from that moment onwards. It became ‘game over’ for Karanja. That’s how disruption happens. True. Story.

So, going back to Safaricom, it would appear that for all intents and purposes, nothing could ever disrupt them. I mean, look at the insane amounts of money that they make! They OWN mobile money in Kenya via the ubiquity of M-Pesa. They have the fastest and best 4G services in Kenya which I can attest to having done numerous speed tests with their competitors’ networks and discovering that none even come close. Safaricom is dominant – plain and simple – even as they deny it (dominant players never acknowledge their dominance – just ask Google and Facebook).

As a long-standing Safaricom customer, you would think I must be happy? However, I am not, 100% happy. My ‘beef’ with them is that in light of their market dominance, you would expect that they must be the best deal in town? They are not, which is the point of this blog post. If you look at the current offers from their competitors like Airtel, Telkom Kenya and Faiba, they all have better-priced data, voice and SMS offerings. This has not been lost on many of their existing customers.

My own observations of many youth consumers are that they have Safaricom lines but many only use it for 1) receiving phone calls and 2) sending or receiving M-Pesa. This means that even though Safaricom has 30+ million customers, many may not be using the network for data, voice and SMS services. I for instance struggle with the fact I pay Kes. 99 per day for 1GB of data but I know that the other mobile networks give you twice the data for the same price. It almost feels like Safaricom chooses to be mean or arrogant, or perhaps it’s just plain old hubris at play. 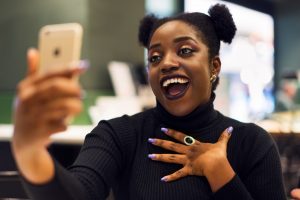 At a macro level, the above youth consumer trend where Safaricom is being relegated due to pricer offerings may seem trivial in light of the gargantuan amounts of money Safaricom makes. Indeed, the Safaricom mobile ‘ecosystem’ is at the peak of its powers and nothing seems like it could possibly hurt them. However, if this trend continues to gather momentum, there could be disruptive implications going forward. I am also reminded of the global trend where generation z and millennial consumers no longer like to make or receive calls (unless they have to?) and would prefer to send and receive texts or instant messages – also known as ‘data exclusives’.

At a micro level, the latest Communications Authority of Kenya quarterly sector statistics show that Safaricom once again lost market share as was the case in the previous quarter? Could this seemingly irrelevant or marginal decline be the first signs of a much larger trend happening due to a shift in mobile consumer behaviour happening at scale in Kenya? Could we be seeing the very first indications of how Safaricom could get disrupted? I’m personally not sure and it seems highly unlikely at this juncture. I am certain Safaricom is aware of what is happening so unless they react in a timely and aggressive manner, this trend has the potential to undermine their long term success as Kenya’s leading mobile network.