Its been nothing short of astonishing just how much the #Githeriman hashtag and meme trended on both Twitter and to a lesser degree Instagram in Kenya during the last couple of days. #Githeriman is the viral trending meme of Martin Kamotho, a Government Cleaner from Kayole who was photographed standing in a queue at a polling station on election day earlier this week holding a bag of ‘githeri’ (a meal made of maize and beans thats quite popular in Kenya).

The #Githeriman photograph caught the imagination of the nation at a time when we are still waiting for the final results of the presidential election. #Githeriman as a trending meme brought out much needed humor in Kenya in a somewhat tense atmosphere and we all have relished (pun intended) the sweet flavour that came with it.

Being the data obsessed person that I am, I could not wait but to do some Twitter analytics that would give me a better sense of how big the #Githeriman trend is as of this writing. In fact, as I do this blog post, #Githeriman is still the top trending hashtag in Kenya. I do not recall something this big in terms of viral Twitter trending hashtags in Kenya that went so mainstream as we did some years ago with the Makmende meme which I wrote about here. But, enough already! Here is what we are looking at as of this minute where the viral #Githeriman trending meme is concerned:

The above cumulative graph shows how the #Githeriman hashtag trended over the last couple of days? As of today, it simply started to explode in the course of this afternoon. It seems that the fact that #Githeriman is now part of mainstream media when everyone is glued to their screens following the election results must be a big part of the escalating trend.

In the hourly graph above we can see the trending nature of the same period where the biggest spikes happened at 2pm and 5pm today. The logic here would appear to be that these are the moments where we can see a positive correlation in terms of possibly news broadcasts on #Githeriman in the media that would have this impact since he has been featured on several TV media channels as of this writing. 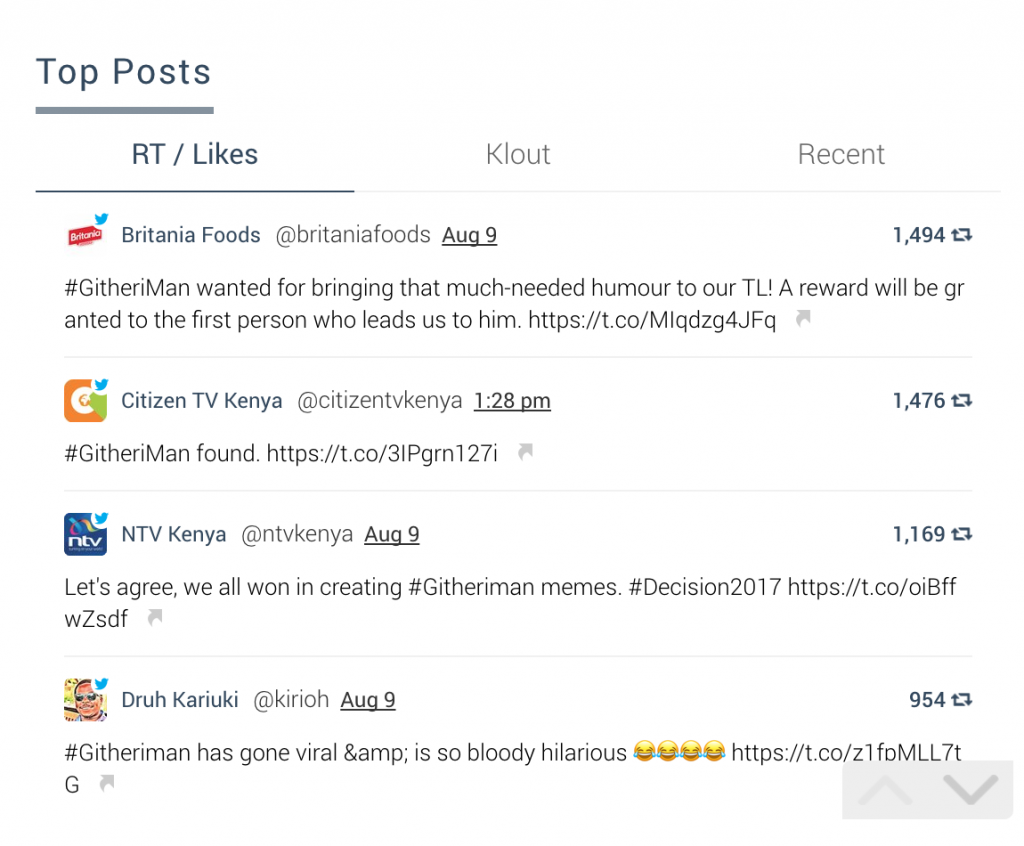 The top retweeted Twitter posts as above had @britaniafoods first with 1,494 retweets followed by @cititentvkenya with 1,476 retweets, @ntvkenya with 1,167 retweets and @kirioh with 954 retweets. Its evident from the above that Kenyan media were major movers in making #Githeriman trend after the initial ‘organic’ bump that was driven by regular users on Twitter (read: influencers) who drove the trending hashtag before it went mainstream. 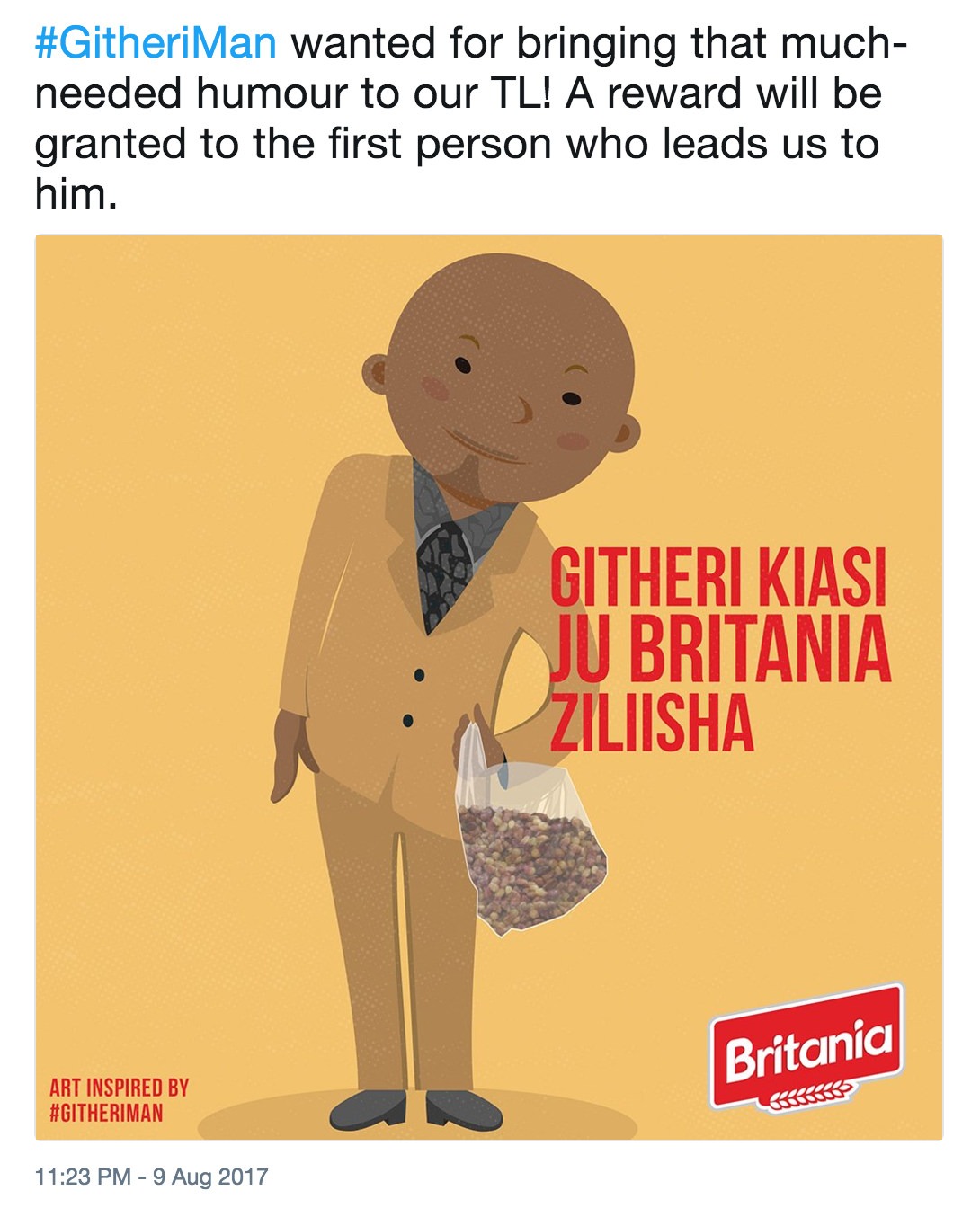 In terms of the most popular tweet in terms of retweets, this is the one that literally takes the #Githeriman biscuit from @britaniafoods who managed to develop a comical illustration that quite literally captured the funny side of the meme in a way that resonated with many people as they engaged wholeheartedly with the post.

The other aspect of the social post from @britaniafoods is that the managed to localize the tone of voice using ‘sheng’ and offering a reward for the first person who could help them locate #Githeriman. Basically this was an excellent case of a brand that jumped into the trending hashtag pot and in the process gained brand visibility and potentially new customers for its offerings in the process. 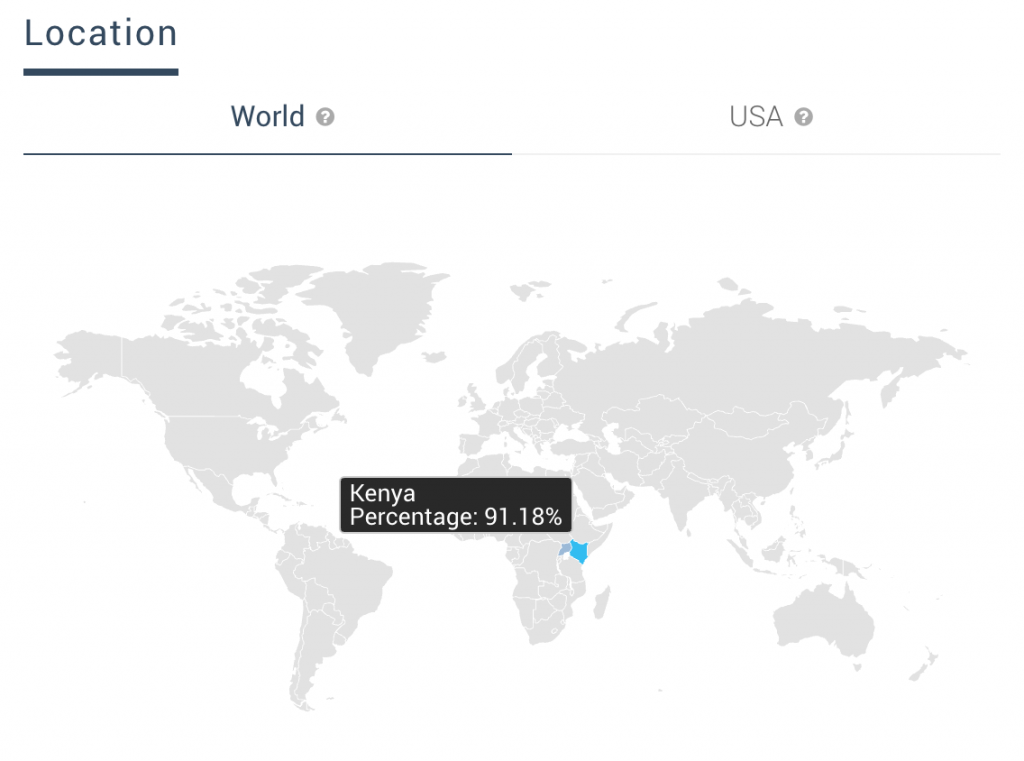 In terms of the location where the #Githerman tweets were the most concentrated its Kenya which had 91.18% of the tweet volume as of this writing. This is expected given that Kenya is the source of the viral trend so I imagine that the rest was being driven by Kenyans in the Diaspora who got clued into the trending meme. This is great since #Githeriman had close to 10% of interest from beyond Kenya’s borders. 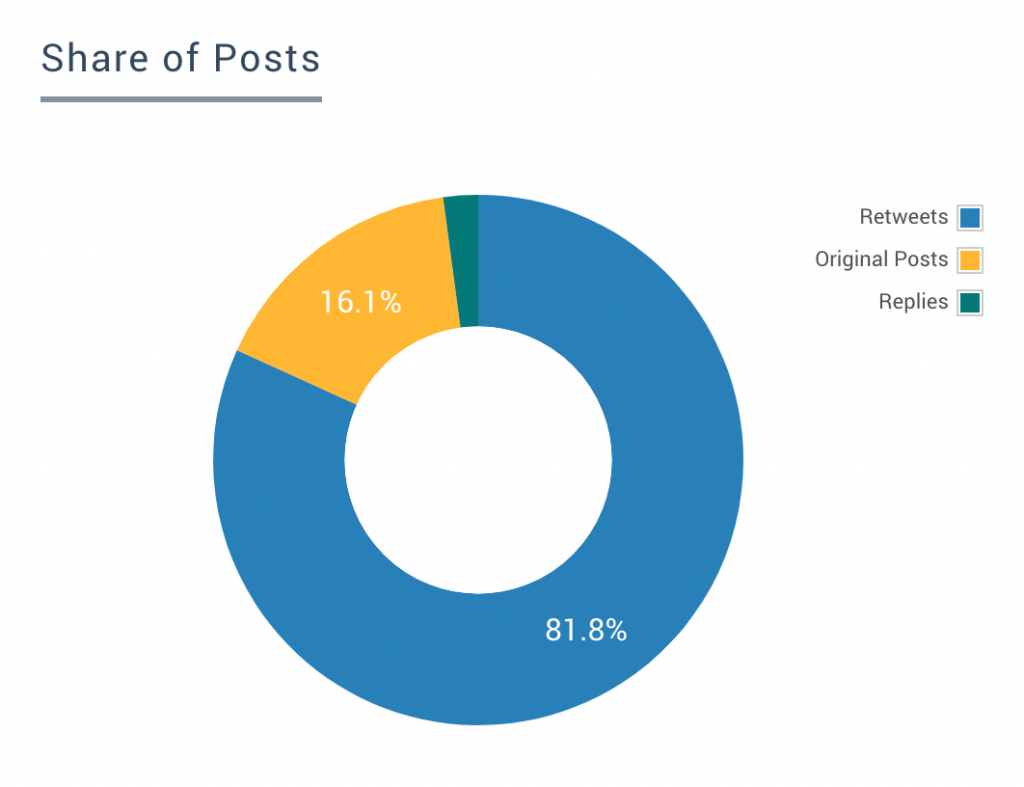 In terms of the tweets that actually went out the majority were retweets at 81.8% followed by original posts on Twitter at 16.1% and replies forming the smallest percentage. 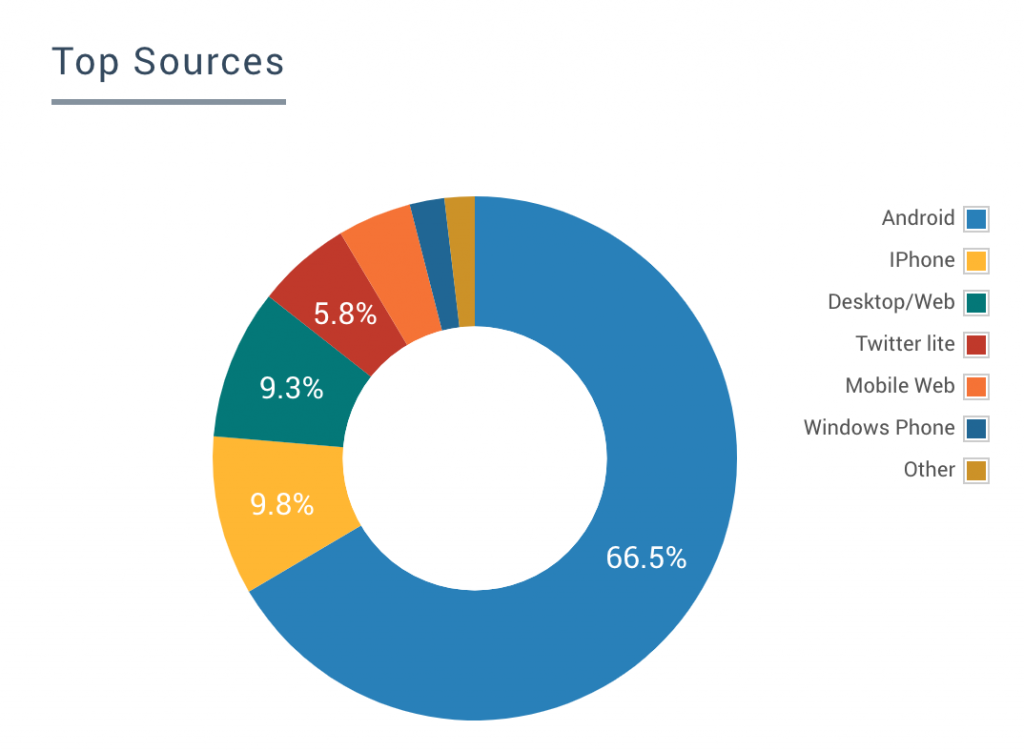 The most popular devices that were driving the trend were Android mobile devices with 66.5% of the meme traffic on Twitter meaning that smartphones were key to the trending hashtag for #Githeriman. The second most popular mobile device was iPhone’s at 9.8% followed by Desktops at 9.3%. 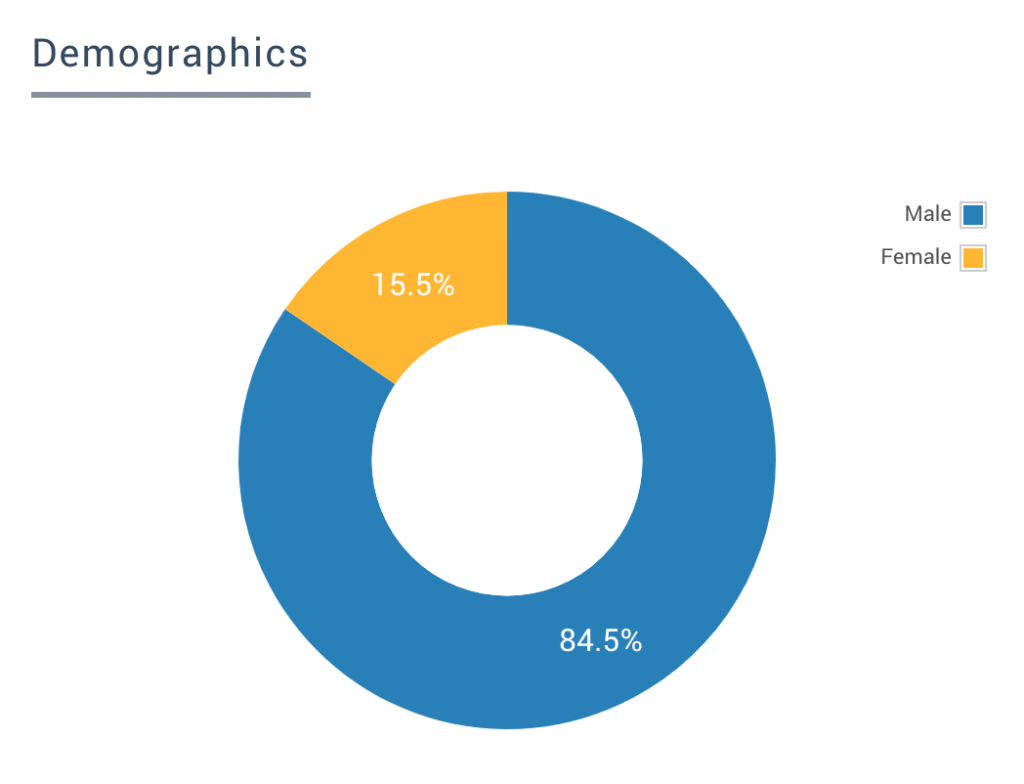 #Githeriman reached 4.8 million Twitter accounts and saw over 12 million impressions in the course of this afternoon which is just huge! This is still the top trend in Kenya as of this writing so I am guessing it will hit over 10 million accounts by time it starts slowing down.