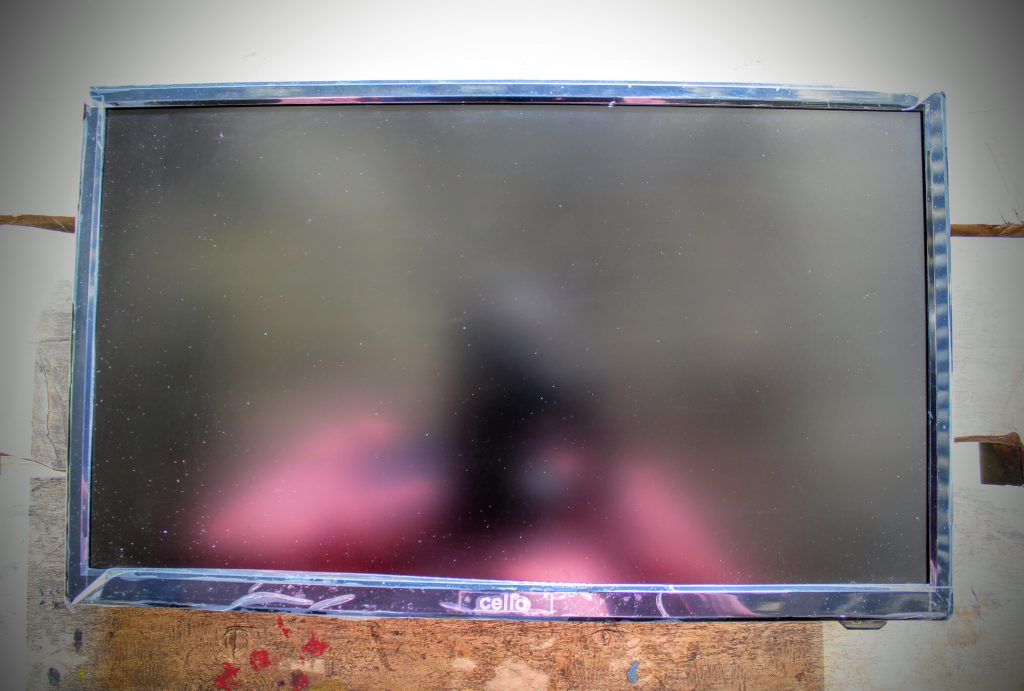 I did a blog post a couple of weeks ago when I attended Solar Africa in Nairobi to see the team from Cello Electronics’ who had just launched their Solar TV. Well, the story gets better. I’ve had a Cello Electronics’ Solar TV at home for 2 weeks and was able to do a complete unboxing and testing of the same as depicted in the gallery below. I have the 1920 X 1080P HD and 22 inch model of the Solar TV which means it has a fairly small footprint, is highly portable and quite light. Unboxing the Solar TV is quite straightforward. However, I did need to access the manual to figure out how all the pieces work together.

The Solar TV comes somewhat disassembled meaning you have to unbox and connect the aerial and solar panel. This requires using a provided screw driver and some screws as well. In addition, you have to unscrew the back panel of the TV to access the battery which then needs to be connected and closed again using the provided screw driver. Lastly, you have to screw in the ‘legs’ of the Solar TV so that it can stand up. Once I took these steps, I turned on the Solar TV as the battery was already charged to get started. Although I am something of a techie when it comes to all things technology it was NOT rocket science to get the Solar TV up and running meaning that this will be easy for most users to do. 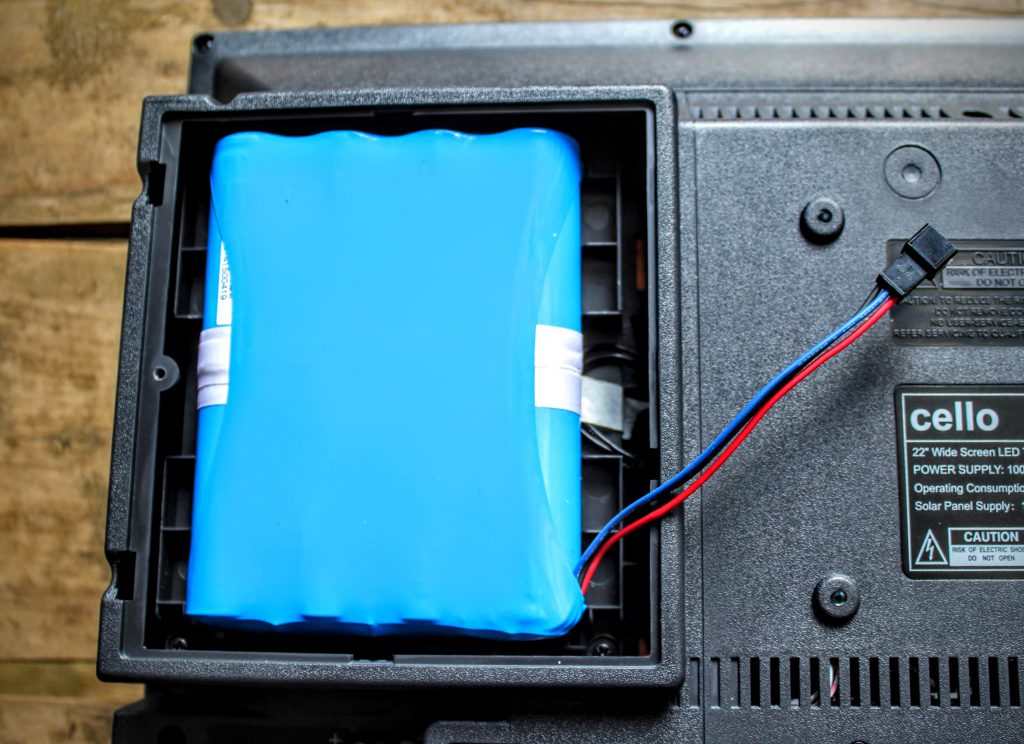 The next step was to tune the Solar TV so that it could actually pick up free-to-air (FTA) digital video broadcast (DVB) TV channels in Nairobi, as well as FM radio stations that it can pick too. The process took all of a few minutes and I was on to channels like KBC. However, as I noted, there were lots of PAY TV channels that I could not access since the Solar TV does NOT come with a conditional access DVB card out of the box which would enable it to decode these digital video signals. This is easy to sort out as you just need to get a card plugged in and pay the relevant PAY TV service provider and your up and running. The other thing is that the Solar TV DOES come with a built-in satellite TV tuner so you can use that too if you have a compatible satellite dish. 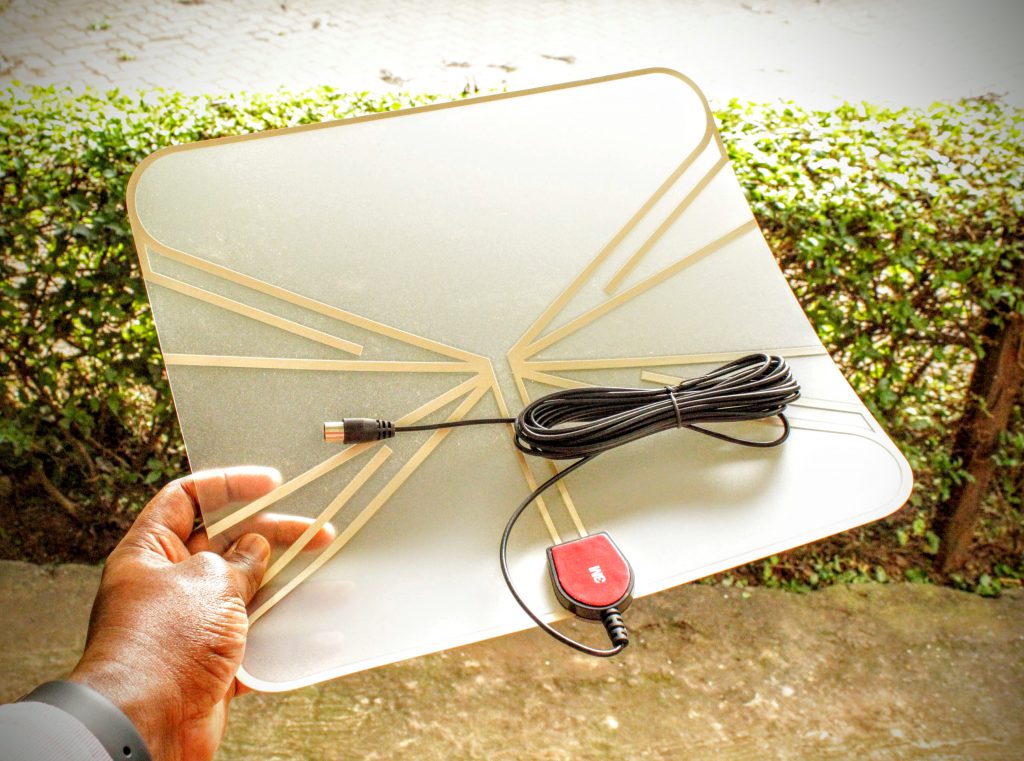 Other interesting aspects about the Solar TV are that the antenna is a smart antenna. What does this mean, exactly? It means that unlike old school antennas this is a state-of-the-art high gain antenna from a technology perspective. One of the perks of this kind of antenna which looks nothing like what you normally see in Kenya is that you can install it indoors or on a window in the house without having to mount it on the roof. It comes with some sticky tape(?) which you can use to stick it on a wall or window inside or outside your home. Once done, your up and running which is really easy and you do NOT need a Fundi to do it for you. As you will see in the images here, the Solar TV smart antenna is compact, thin and flexible. 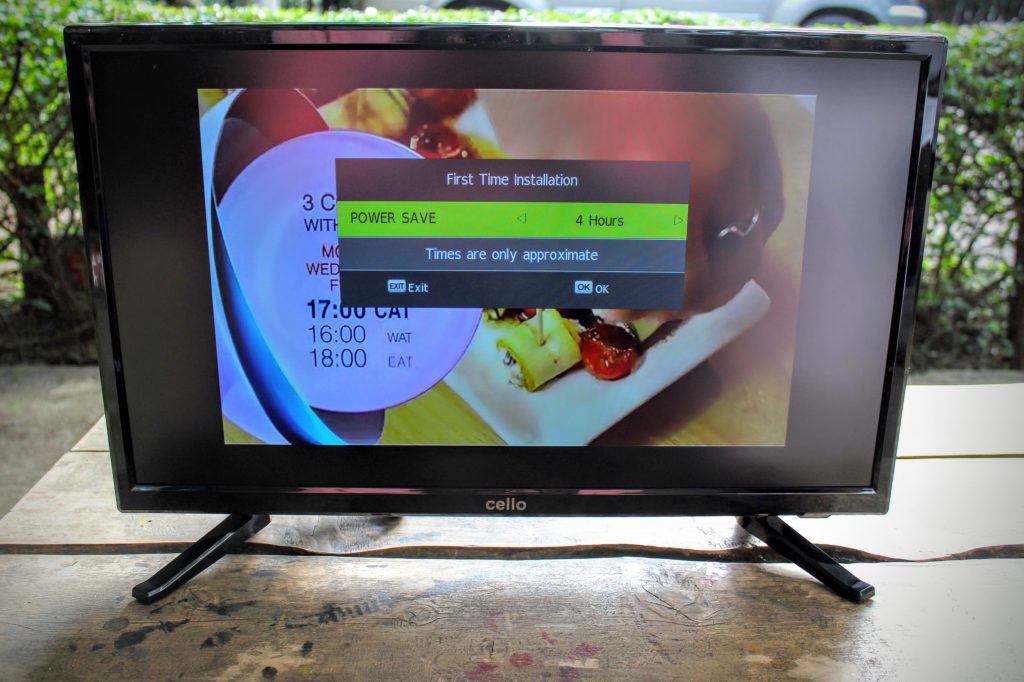 The battery in the Solar TV is a designed to run for 6 to 10 hours on a full charge. The variance in the time depends on whether you run it on full power or low power mode which means that in the latter the screen is dimmed to reduce power consumption. This is impressive given that you could go a whole day having the Solar TV running off the grid. The Solar TV battery is charged using ONLY the solar panel so that during the day the Solar TV can optimize how much power it pulls from the battery as well as the solar panel. This is especially important given that we generally have lots of sunlight in Kenya throughout the year so its feasible to run the Solar TV off the grid. However, I also noted that if one knew what they were doing they could in theory connect an external car battery or even the main power from the grid to the Solar TV using the solar connectors via an adaptor. This would be a retrofit that could be feasible even if Cello Electronics have NOT explicitly stated this is possible. 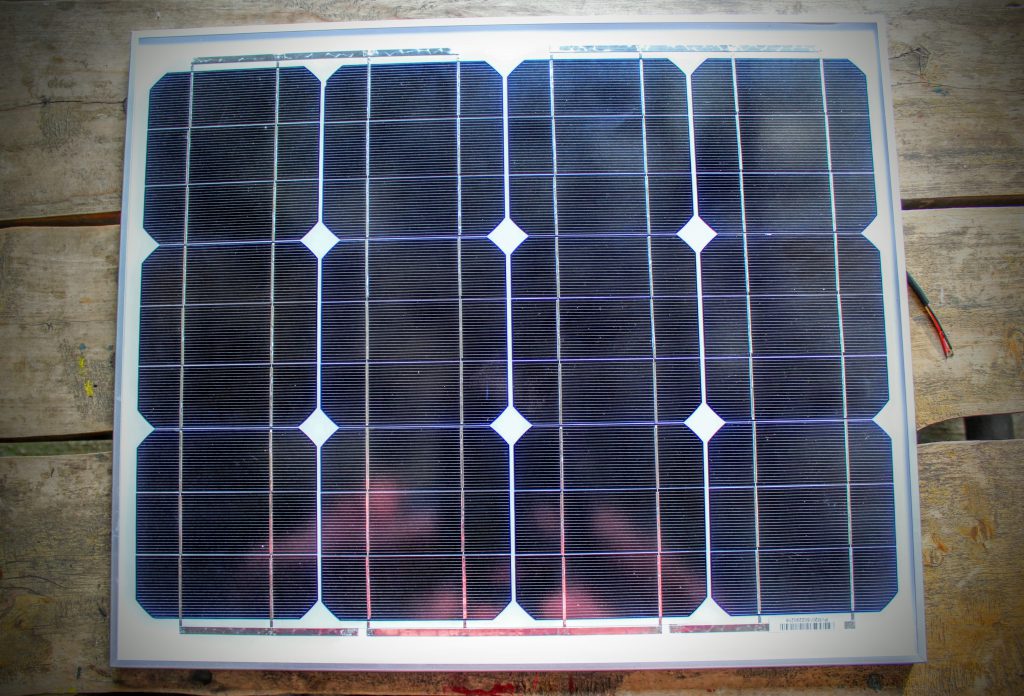 One multifaceted feature about the Solar TV is its USB port. The Solar TV USB port has been designed so you can use it to watch or listen to digital content from flash disks. This is especially handy for those who have MP3 and MP4 files that they can use on their Solar TV as is commonly the case with many TV users these days. However, the USB port has also been designed that it can be used to charge devices like your mobile phone using the built-in battery. This is especially useful for those who need the Solar TV to act as a power bank for their devices off the grid. The last feature about the Solar TV’s USB port is that it has also been designed so that you can use a flash disk to act as data storage for its personal video recorder (PVR) feature. YES! The Solar TV lets you record TV content which you can consume later at your convenience using the PVR feature. This is really cool! 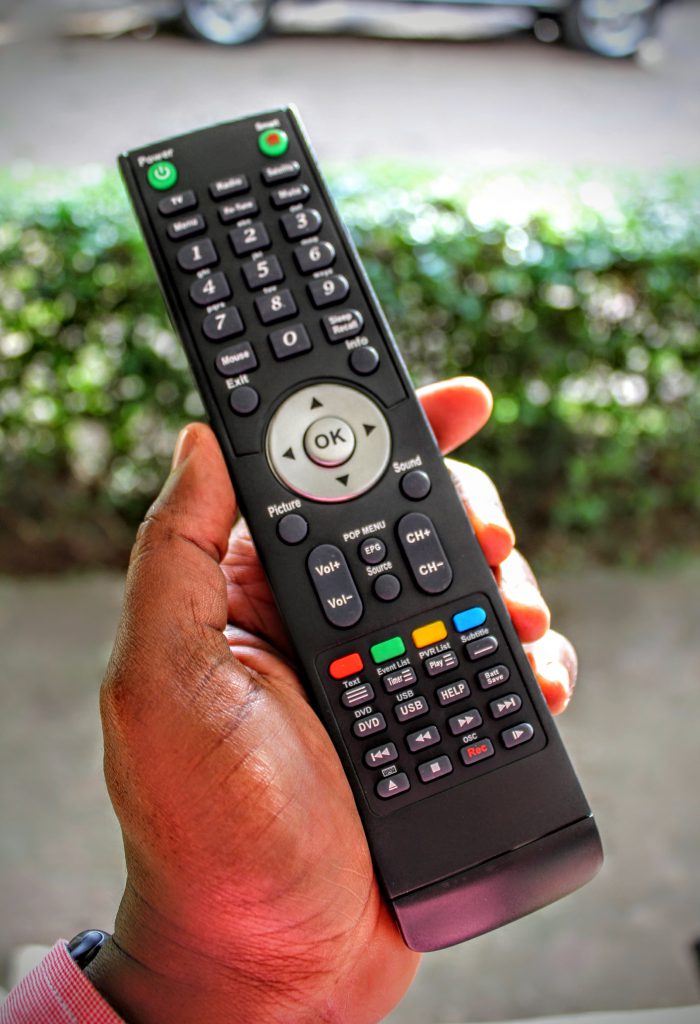 In addition to the USB port, the Solar TV also comes with other ports for the satellite dish, HDMI connector, standard coaxial cable for TV, video connectors, etc. The Solar TV also comes with a remote control as expected which gives you access to all sorts of advanced features that you would need to get the full utility of using the Solar TV as is the case with any decent TV these days. Whether its managing power consumption, using the timer, saving content using the PVR feature, etc, these are all accessible using the remote control. It also helps that the remote control comes with batteries included out of the box which can be a real pain when they are not there as you set it up. 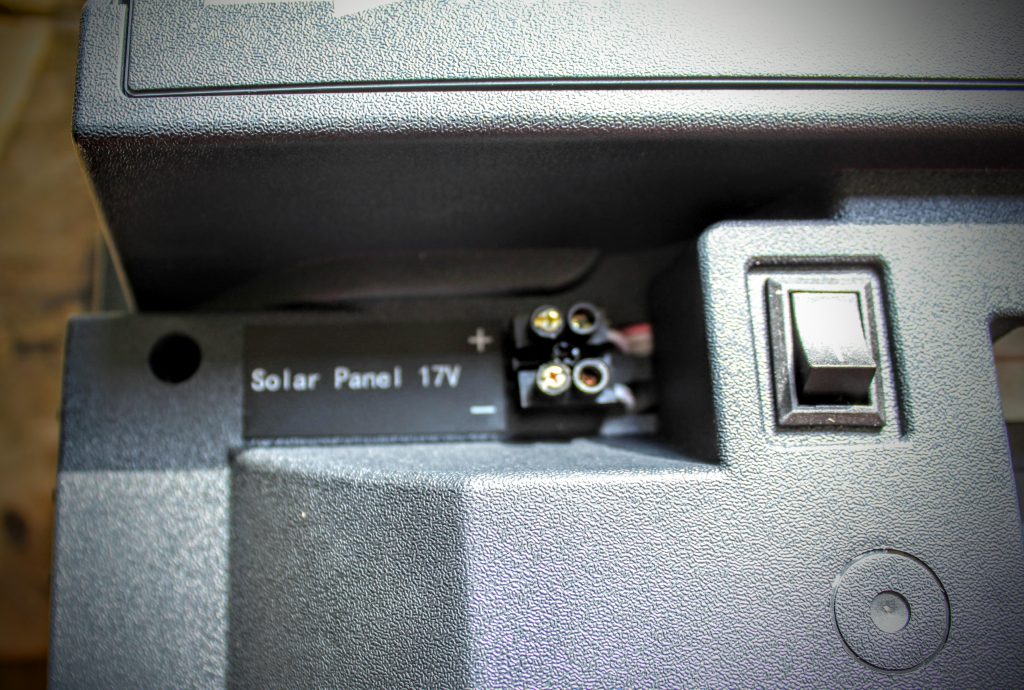 In a nutshell, the Solar TV looks like decent value at Kes. 25,000.00 when it finally makes it to Kenya. One thing to note is that it is designed to work purely off the grid and therefore is really NOT your traditional TV offering. However, given that Kenya has over 80% of its current population off the grid, the Solar TV has massive potential for those who want a world-class TV that is designed to work using just the sun as its primary energy source in one compact, utility-driven and integrated unit. My sense is that if Cello Electronics build up the right retail channel distribution and micro-financing partnerships with a bias to rural Kenyan markets they could stand a chance of becoming a dominant Solar TV player in the marketplace. 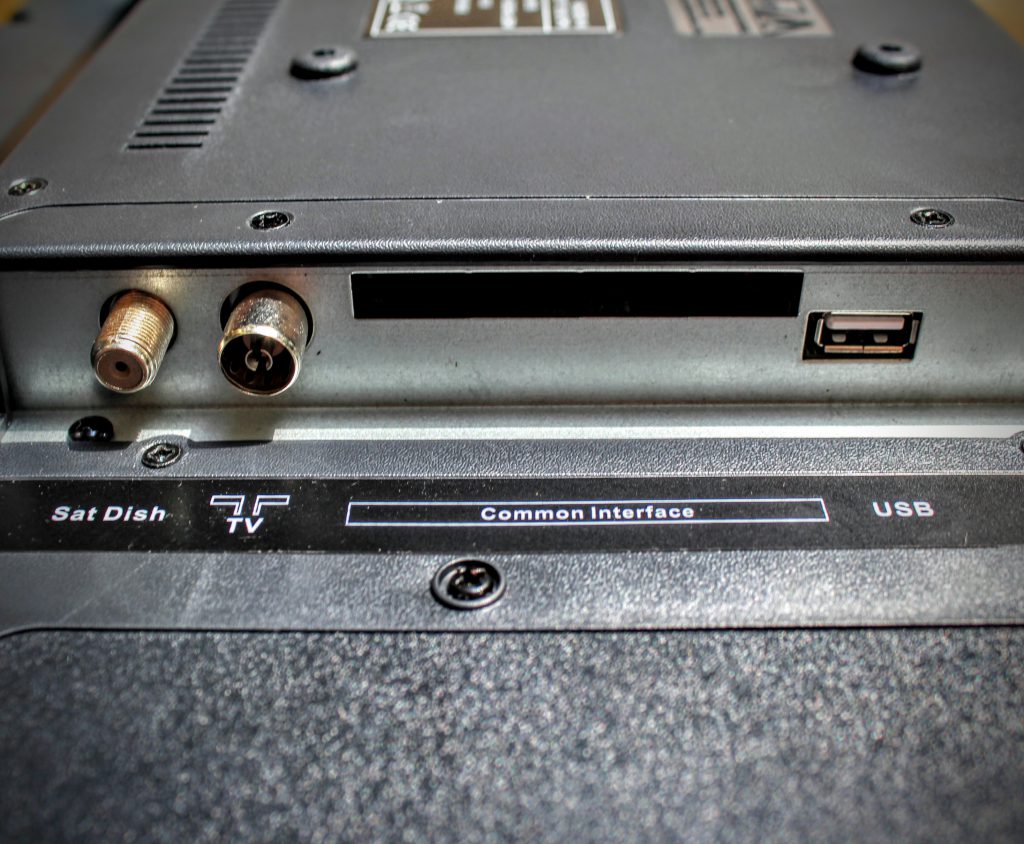 If you could be interested in Cello Electronics’ Solar TV on commercial or retail basis, you can reach them as follows: