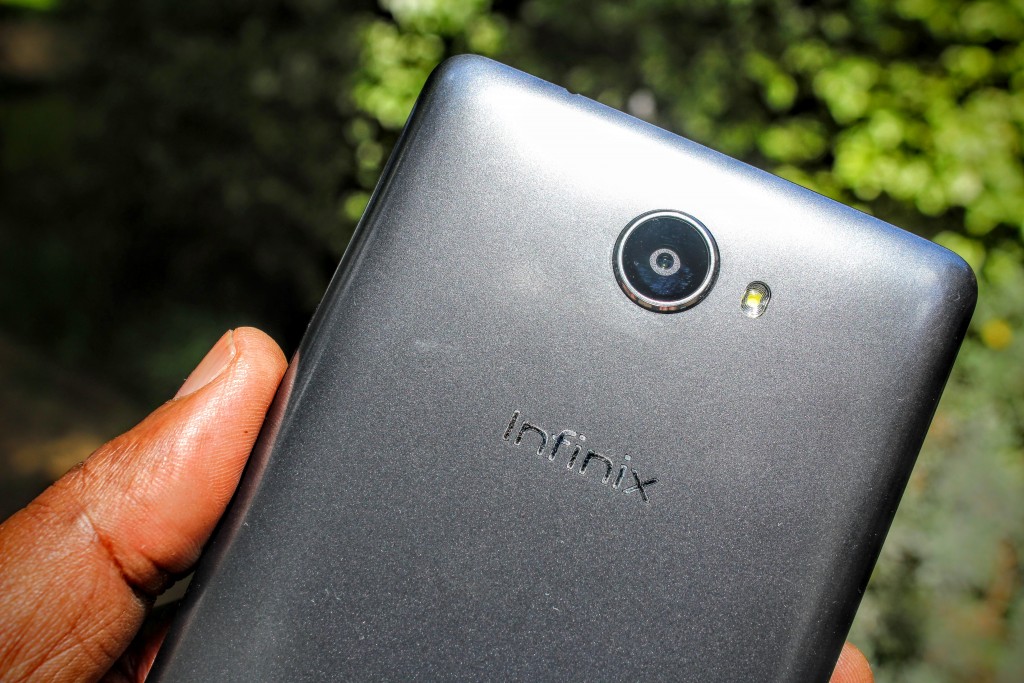 Infinix seems to be on a roll in Kenya. Indeed, after launching their first edition Note device earlier this year they confirmed sales of around half a million? This is NO mean feat. Those are amazing sales for a single smartphone model in Kenya meaning that when you combine them with the other mobile devices they are selling you can say they are easily one of the biggest smartphone players in Kenya at this juncture.

A few weeks ago, Infinix reached out to me to give me their latest mobile device in Kenya – the Infinix Note2. I have been using the Infinix Note2 for the last week or so and even did a video of the unboxing here last week. The first thing to note about the Infinix Note2 (did you see what I just did there?) is the price – its going for a relatively low price of only Kes. 12,500.00.

The Infinix Note2 also comes with a 6 inch HD screen, dual SIM, a 4040 mAh battery, 16GB RAM, 1GB ROM, Octacore Processor, Android Lollipop, and a 13 Megapixel back facing camera. Awesome! These specifications are impressive but ultimately they only really matter in terms of how the Infinix Zero2 actually performed, hands on? Therefore, here is the full review of the Infinix Note2 based on my experience of using the same:
Price

The price of the Infinix Note2 is probably one of the most appealing aspects of this smartphone. It just seems like a 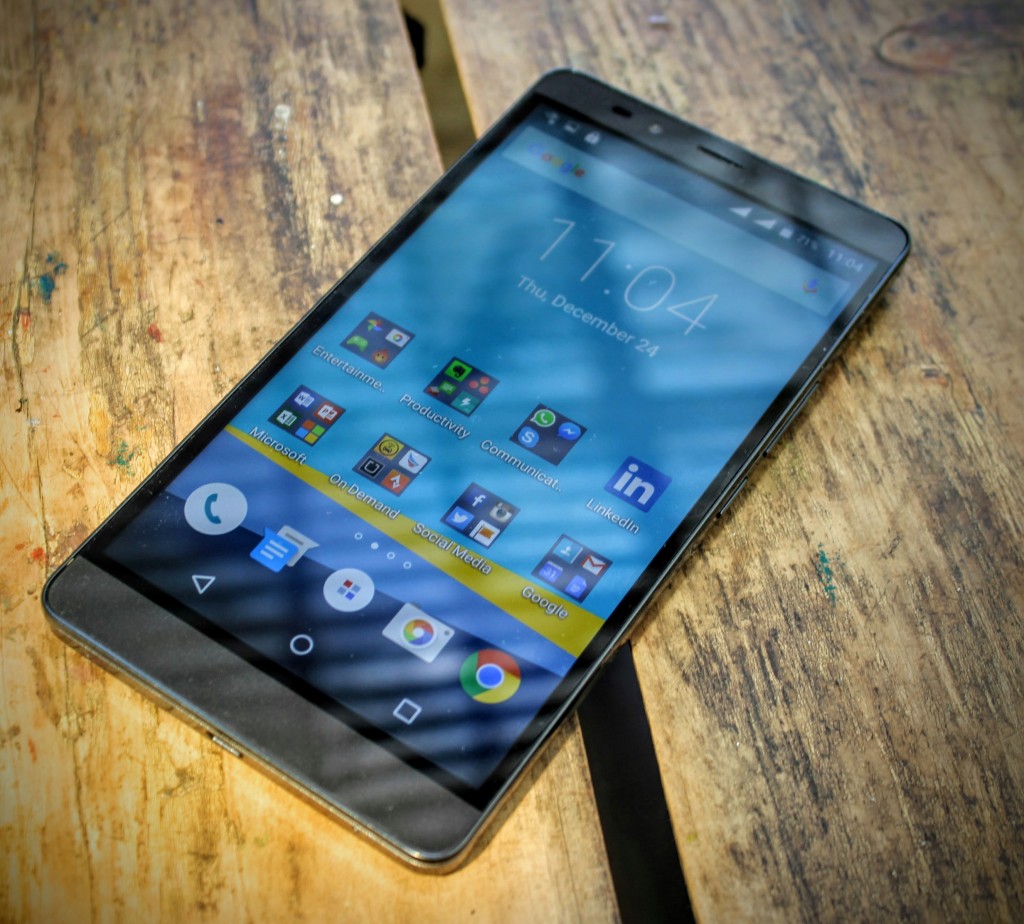 whole lot of smartphone for a really affordable low price. I normally play around with mid-range to high-end smartphones which usually at the very least would cost twice as much as the Infinix Note2 does? That being said, I was extremely skeptical at first as to what to expect. The Infinix Note2 will sell really well irrespective since its within the price range of lots of prospective customers.
Back-Facing Camera

The back-facing camera of the Infinix Note2 is impressive at 13 Megapixels. This increasingly seems to be the average specification for many new smartphones in the marketplace meaning that getting sharp and crisp photos should be easy for most? I actually put the camera through its paces and I was generally NOT disappointed. It works, really well. However, one thing I did note is that it was quite prone to shakes so one had to have a really steady hand for most pictures? I also found it quite surprising that the Infinix Note2 does 1080P HD video. I did not expect that and this is really good for a smartphone at this price.

One thing that ticked me off is that for some reason I could NOT get Google’s camera Android mobile app to work on the Infinix Note2 and instead had to resort to default mobile app that came with it. The last thing is that I have not even bothered to mention to front-facing camera since its a disappointing 2 Megapixel which meant I didn’t even bother doing the ‘selfie’ thing with it. That being said, you can see the really good back-facing camera photo quality in the gallery below: 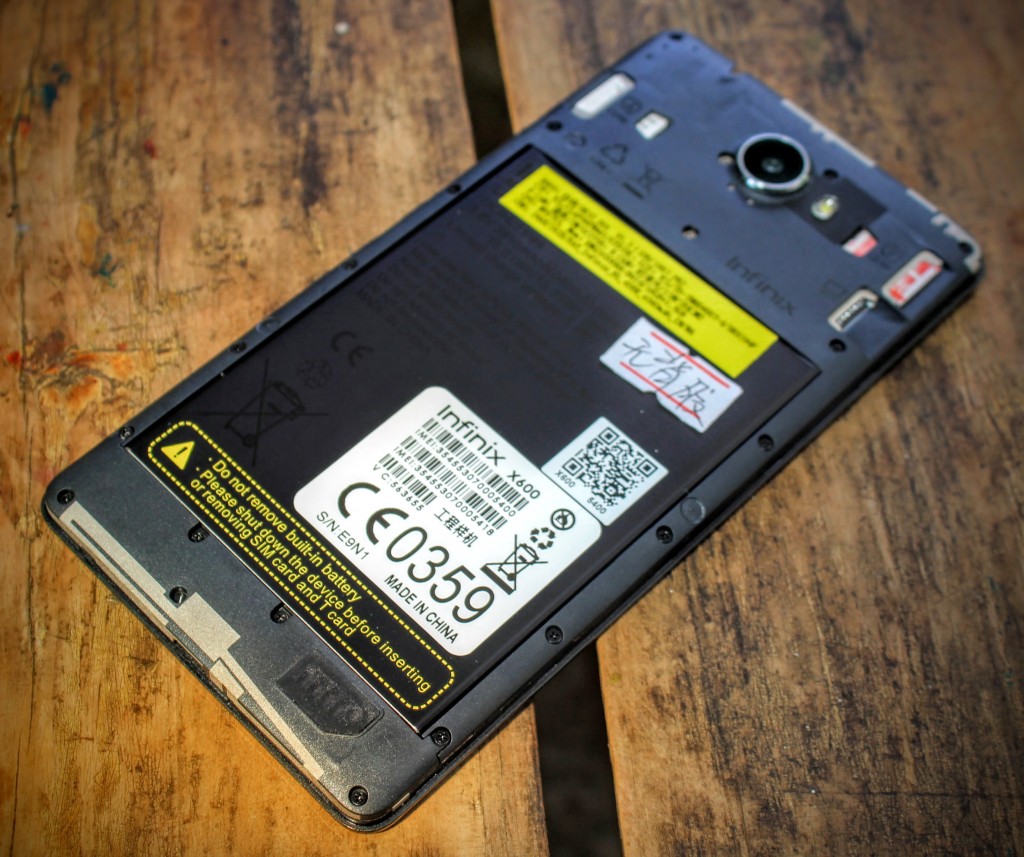 The Infinix Note2 comes with a battery that has an insane capacity of 4040 mAh. This is probably one of the biggest selling points behind this smartphone as it means you could (theoretically or practically?) go for 2 days without needing a recharge. I personally found it incredibly capable of giving the Infinix Note2 a full day of service, with ease. Indeed, if I was a more modest mobile Internet user I am sure it could do the 2 days of service but I never went that far. Access to regularly available electricity can be a huge challenge for most mobile users in Kenya so this battery will win lots of fans for the Infinix Note2. In addition, it also means not having to lug around a power bank all the time as is normally the case with typically less endowed smartphones in the battery department.

I am big on music and audio when it comes to smartphones so I did put the Infinix Note2 through its tests. It was able to do the job and using my old earphones I was quite happy. One thing that I found quite shocking during the unboxing video is that the Infinix Note2 does NOT come with any earphones. Whats up with that, Infinix?! I just assumed that in this day and age one always gets these with a smartphone – even if they are really cheap and have bad sound quality but none at all in the box was a little unexpected. 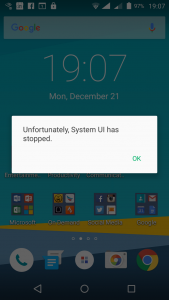 Once I got the Infinix Note2, I did what I always do. I loaded it up with all the mobile apps that I need to function in an optimal manner from a personal and professional perspective. As mentioned earlier, the Infinix Note2 comes with an Octacore processor as well as a modest 1GB of RAM and 16GB of ROM (as could be expected from a smartphone selling at this price). That being said, the Infinix Note2 did not disappoint. I was able to function as well as expected with no major hitches. However, once I opened up a whole bunch of mobile apps at the same time I did notice a significant drop off in the time it took to switch them around in multitasking scenarios.

To get around this issue, all I did is try to keep the number of mobile apps I had opened to around 3 or 4 at any given time and it then worked as well as a much more expensive smartphone would. One major caveat I did notice is that the Infinix Note2 would crash quite often for no apparent reason with the error message ‘unfortunately, system UI has stopped’ as seen in the screen grab here. I found a fix for it online but clearly most buyers including me would be peeved at the idea of having to resolve it on a brand new smartphone. I was able to just keep using the Infinix Note2 through the crashing but it did get more and more irritating over time.

Another issue I had with the Infinix Note2 is that for some reason it would NOT connect to my 3G Internet service from time to time? I would then need to reboot it and then it would immediately connect. This was an erratic and unpredictable problem but it happened often enough to irritate me. That being said, it was an ‘on and off’ problem so I could never really figure out what exactly the root cause could have been. 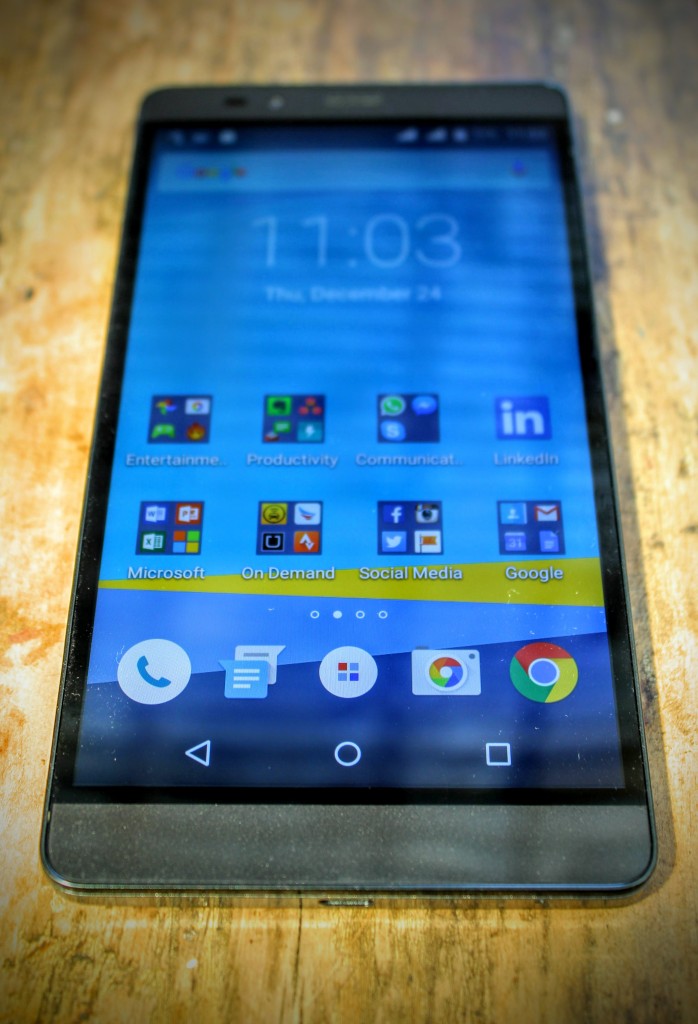 Did I mention that the Infinix Note2 has a massive display? 6 inches of HD display to be precise. This is the one thing that really grabs you the first time you pick it up and turn it on. The 6 inch display is decent but I would not call it excellent except that at the price its being sold for its incredible value for money! 2015 will clearly be remembered as the year that great smartphones got cheap and cheap smartphones got great! Hands. Down. The 6 inch HD display on the Infinix Note2 had a graininess to it that meant the overall sharpness or crispness was not stellar? However, it did a decent enough job for me but people will notice that this was a major area of compromise so that they could hit its amazing price point in the Kenyan marketplace. I found that I was able to play games and watch movies on the Infinix Note2 with no issues but there was a glaring contrast in quality once I switched back to one of my higher-end smartphones at the end of the review.

The overall design and build of the Infinix Note2 was a pleasant surprise! Out of the box, it felt like a smartphone that should easily be worth more than twice the price its selling for in Kenya at the minute. The overall finish feels like a really tight package even though its NOT a unibody design so you can access your battery, dual SIM cards and Micro SD Card slots after removing the back cover.

I used the space gray model meaning that my Infinix Note2 had a metallic finish even though its made out of a plastic case. The bezels next to the screen were thin and being a 6 inch smartphone it could get hard to tap around the display given just how large this thing is! My mainstay smartphone prior to the Infinix Note2 has been the Tecno Phantom 5 which features a 5.5 inch display and the Infinix Note2 dwarfs it! All things considered, the overall design and build quality of the Infinix Note2 looks and feels really good to the extent its more premium than its low price suggests. 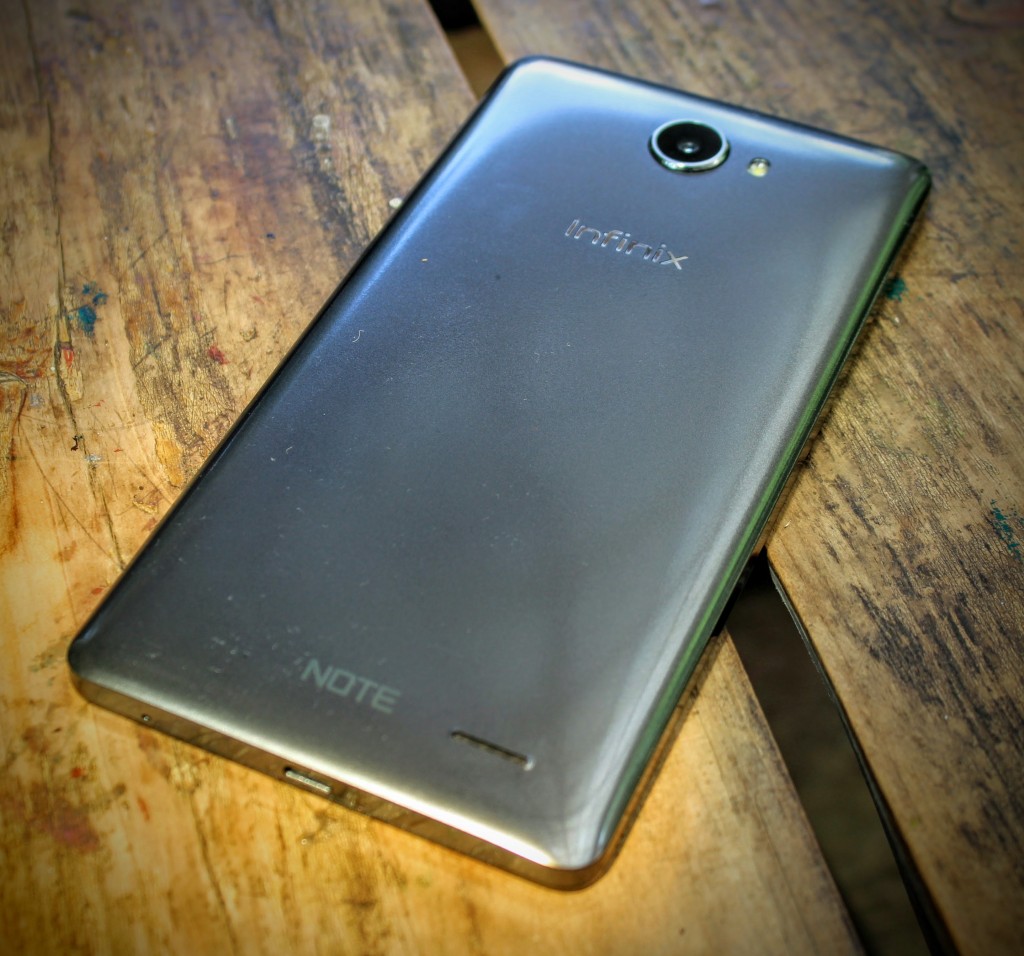 What can I say. I was surprised at the price. I was even more surprised that the Infinix Note2 was able to handle all the mobile apps I pushed at it, and more. It was good enough to the extent that I am still using it and have no overwhelming desire (just yet?) to get back to my high-end smartphone(s). A few months ago, I would have expected a smartphone like the Infinix Note2 to cost at least twice the current price and still be great value for money. Things have changed in the world of smartphones as they are getting less expensive but are also good enough for most consumers out there, across the board, including me. Although Infinix really did have to cut a few corners with the Note2 to make it work the majority of customers will not notice and will fall in love with it anyway. On this basis,  I give it a solid 8/10!