A Review Of The French Wiko Rainbow Android Smartphone 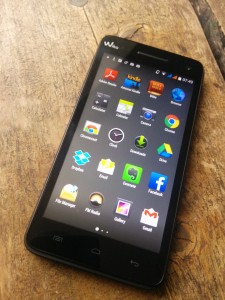 Its been a minute since I last did a smartphone review here so really happy to finally get round to doing one. Wiko is a French mobile brand that is the second largest smartphone manufacturer in France and also the fastest growing mobile brand in Europe after only 3 years in business. Wiko launched in Kenya in September 2014 and started selling its smartphones in October 2014. The first smartphone they launched in Kenya is the aptly named Wiko Rainbow. I have used the Wiko Rainbow for close to two months and its been a pretty decent experience for a mid-range Android smartphone. 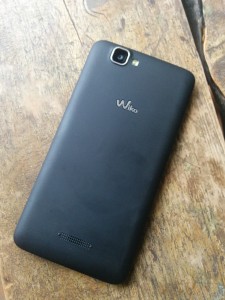 The overall design of the Wiko Rainbow is ‘good’ and in-line with the more or less ‘generic’ look you get with mid to high end Android devices you get these days out of the box. However, the rainbow is unique in that it comes with a number of back covers that you can change to different colours. The default is the black one which is what I used most of the time but I could have had it green or yellow as well with the other back covers available out of the box. All the back covers irrespective of colour have a ‘matt’ finish like the rest of the phone which somewhat reminds me of the LG Nexus 5 that I was using before it. It gives the Wiko Rainbow a more tactile feel and certainly does NOT give it the all-to-common ‘plasticky’ and ‘cheap’ looking finish. I would say that this is clearly the ‘french connection’ at work where design-thinking is concerned even though the Wiko Rainbow is actually made in China. Opening the back cover to access the battery, SIM card slots and Micro-SD slot is a pleasure is it has a ‘clam-like’ back cover that feels solid and does not pop off if you drop the phone accidentally. One thing I did not like is that it felt a little ‘thick’ in width and ‘long’ in height so it did not feel ‘svelte’ at all but more ‘brick-like’ in my hand? Naturally, this is a minor issue that I got used to in no time at all. 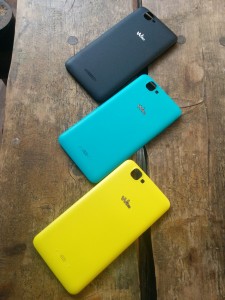 Out of the box, the 5 inch HD screen Wiko Rainbow as mentioned earlier comes with a Dual SIM slots which I found handy since the last time I used one was last year when I reviewed the Tecno Phantom A smartphone. In this case, I loved that Wiko provides several adaptors for both full-size Mini SIM slots so that you can use use both Nano and Micro SIMs without having to buy the adaptors seperately. I thought this small gesture is super convenient since my current SIM cards are both Micro and Nano so this worked like a charm. The Wiko Rainbow comes out of the box with usual accessories such as headphones, chargers, etc which worked for me quite well. One thing I did not ‘love’ about the Wiko Rainbow is that after using higher resolution Amoled screens on smartphones the HD screen looked a little off and the colours did seem a little washed out. This was a minor inconvenience for me bearing in mind that the Wiko Mobile is retailing for approximately Kes. 17,000.00 in most retail outlets in Kenya which is a fair price for a smartphone of this quality. 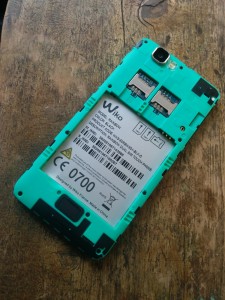 In terms of the overall performance of the Wiko Rainbow I found it to be a super replacement for my usual higher-end smartphone. I did not feel hindered in any way where the Quad Core processor is concerned. However, one thing that unnerved me is that I needed to buy and install a 16GB Micro-SD Card as it was impossible to do much with it without expanding the on-board memory available. This was mandatory and if you are considering buying this smartphone do make a point of purchasing a decent memory size Micro-SD card to get enough space for all your mobile apps, photos, music, etc. Once this is done, you are good to go. Internet was breeze at all times and it was quite handy in that I was able to switch easily between my SIM cards for Internet access. Honestly, the Wiko Rainbow performed like a champion for the most part and I found myself eventually but reluctantly returning to my top of the range Android smartphone only due to nostalgia and the extra ‘oomph’ I was used to.

The 5 inch HD display was good but not excellent. This is a caveat of most mid-range Android smartphones in that you do really get what you paid for. Ultimately, its not even worth mentioning since within a couple of days I was more than used to it.

I had a ‘love hate’ relationship with the camera on the Wiko Rainbow. My main beef with it was that unless you held it really steady at all times, it always seemed to put out images with a slight amount of blurring. I am avid amateur photographer and regular Instagramer, so my smartphone is my number one camera and it needs to work well. I also found the lag time when doing action shots was really long and did not work instantly the way I am used to? This was my experience, initially. However, once I figured out how to work it, I managed to shoot some amazing pictures using the 8MP camera on the phone with remarkable consistency. I have shared a few of those pictures here in the gallery above give you an idea of how good the camera was, even in relatively low light conditions. So, basically, I made it work and it could work great for you too. I never did use the front camera to be honest and at only 2MP I really did not find it to work for me – then again, I am not exactly a citizen of the ‘selfie’ generation! 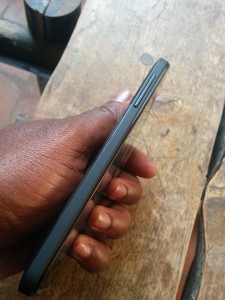 I got variable results from the battery. On occasion, I found that I could charge through a full day with ample time online with no need to recharge. However, on the really heavy days on the road and running from meeting to meeting, I needed my trusty power bank on hand to top-up the battery life. Battery life is always a little bit of a lottery with smartphones in general(?) and this was no exception with the Wiko Rainbow. So, I will let Wiko off easy on this one as the battery problems plague the majority of smartphones out there irrespective of how expensive or cheap they are. 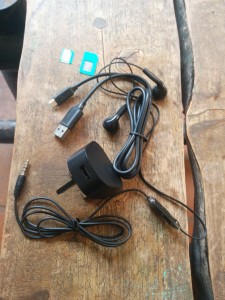 In a nutshell? I loved the the Wiko Rainbow! For Kes. 17,000.00 this is excellent value for money for a durable, fast and well-designed smartphone that does not look and feel like the run-of-the-mill grey market mobile devices coming out of China by the millions. I give the Wiko Rainbow a solid 7/10! There is a good reason why Wiko as a brand is on a tear in Europe and its because they have managed to deliver a high quality smartphone at the right price. I expect that Wiko as a brand in Africa will make a dent on the likes of Samsung, LG, Tecno and Huawei in mid-range and high-end segments of the market going forward.

A Review Of The French Wiko Rainbow Android Smartphone