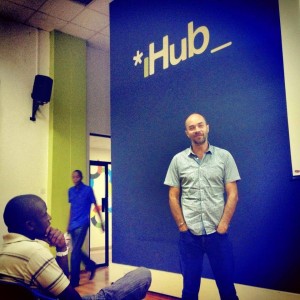 This blog post initially started off as a small note I was sending to Erik Hersman to include in his list of tributes in a blog post for Carey Eaton who passed away tragically yesterday. Instead, I found myself writing freely and honestly and the words just kept flowing, ending up with what you see here.

My earliest memory of Carey was in high school at Hillcrest Secondary where he was a year or two ahead of me around 1991. What struck me about him, even then, is he was the proverbial geek being one of the chosen few who you would find comfortably ensconced in the computer lab on one of the Apple II computers. He also always seemed to be running from one place to the next, a dynamo of apparently boundless energy even back then. He had spiky thick hair as I recall, which obviously faded over the years.

Carey and I lost touch for over a decade after Hillcrest and we got back in touch through no less than that marvel of modern technology known as Facebook. Carey was eager to touch base with me online whenever possible to find out more and more about the opportunities in Kenya’s nascent but fast growing Internet content sector through my work at Dotsavvy. He was like many other Kenyans in the Diaspora who were yearning to come back home, looking for a way of doing so viably. At the time, he was working within the highest echelons of SEEK, Australia’s and New Zealand’s leading careers web site, as their CIO. He had made it, at a global level, in technology, which he still clearly loved as only a geek could love from his high school days at Hillcrest.

As events would have it, Carey and I would eventually touch base in person a few years before he returned permanently to Kenya. We would meet every year during the December holidays in Nairobi for a long lunch at the Ethiopian restaurant ‘Habesha’, off Argwings Kodhek in Kilimani. Carey, being Carey, would fire off numerous questions and try to get a sense of what was happening in Kenya’s technology scene, often sharing his own insights from his work then at SEEK. The dude was energetic, almost feverishly so, about what he could do in Kenya, given his impressive and prescient vantage point from ‘Oz’.

I recall, quite vividly, when he asked me what I thought of the name ‘Cheki’ as a brand name for an Internet business in Kenya. Cheki was Kiswahili slang back in the day for ‘checking out someone or something, or a hot guy or girl’. Little did I know back then what would come to pass. It was after one of those annual December holiday Habesha lunch rituals, where he was always partial to the raw meat ‘Kitfo’ dish, that he wired me some money to register ‘cheki.co.ke’ for him. The rest, you could say, is history.

Indeed, at one point, Carey and I were serious competitors when I was running Dealfish and he was running Cheki a few years ago. But, even then, we remained steadfast friends. Last year he proved to be one of my most active supporters at PIVOT East 2013, an event I produced for mLab East Africa, where he was a judge and mentor for our competing mobile startups. I also remember him slyly sending me a pre-media press release of the US$ 20 million One Africa Media had received in investment from SEEK last year – I called him up excitedly to congratulate him as the new ‘Oga’ in Africa and promptly did a blog post here on the same. It was only a couple of weeks ago we had been discussing business possibilities on phone and talked about meeting up soon after Cheki had sponsored the Ghanaian football team to this year’s edition of the World Cup – a major feat by any standard. I had no idea that was last time I would speak to him.

Yesterday was a strange day. I first got a call from my wife in the morning that one of our neighbours at home had been at an incident the previous night where a friend was shot dead by thugs. It was shocking but I had no idea at the time who it was. I then got a call from my former colleague Joshua Mwaniki shortly thereafter who told me that Carey Eaton had been shot dead at a dinner or something as the details were sketchy. I was in absolute shock and disbelief. I put two and two together and it seemed it must have been the same person. It was a busy day no less and at the end of it everything just sort of seemed to finally sink in. I had tears in my eyes and the deepest sense of loss.

There are too many things I could say in praise of Carey. More than I could write here. He was a super generous guy. He had a true sense of passion and purpose for technology and Kenya that was simply inspiring and infectious. What Carey accomplished through his technology businesses in Africa over the last 5 years or so is mind blowing.  Where many talk, Carey just did it. Pragmatic and effective execution seemed to be his domain.

Carey, we do not know the reasons why you are not here today. We cannot fathom why what happened, happened. But what we do know is that as our friend there is much we gained from your friendship. That there are many in Kenya and beyond who will find it impossible to replace someone who was as giving and committed as you have always been to all of us. Kenya and Africa at large have lost a true titan of technology whose triumphant journey back home was ruthlessly cut short. We will miss you and all that you had to share with us. Rest In Peace Carey.