Safaricom has partnered with PSV operators in an initiative that will see passengers access free internet in more than 200 matatu’s and buses by September this year.

A total of 46 PSV vehicles plying the Buruburu, Langata, Rongai, Umoja, Githurai, Dandora, Kiambu and Kenyatta University routes have already been fitted with subsidised Wi-Fi routers in the Kshs.7 million initiative which is part of the Telco’s on-going effort to grow its data footprint.

The move will give customers the opportunity to remain connected to unlimited 3G internet without having to use their existing bundles. Buses on the Nairobi- Mombasa route will also offer the innovative new service.

Speaking during the launch, Safaricom CEO Bob Collymore hailed the partnership with the PSV sector noting that the move to provide “mobile internet” was a perfect example of products and services adapting to suit consumers’ lifestyles.

“Most of our customers use Matatu’s and buses as their preferred mode of transport on a day to day basis. This therefore presents us with a fantastic opportunity to drive home the internet story and make it a way of life among our customers which we believe we will achieve by availing FREE Wi-Fi internet in matatus,” said Collymore.

Collymore further added that that the new initiative is part of an on-going campaign to democratize data. Presently, more than half of Safaricom’s customer base has access to an internet device a result Collymore attributed to the introduction of subsidized smartphones.

Said Matatu Owners Association Chairman Simon Kimutai,“This is a very exciting phase for the PSV sector. We have a lot of innovation put into buses and matatu’s over the years, but this is a major milestone. With over 300,000 Kenyans using public transport every day, we believe having Wi-Fi in PSV’s will go a long way in making our passengers commute worthwhile”,

With 1,439 bases 3G base stations, Safaricom accounts for more than 50% of all internet connections in the country. Data accounted for more than 23% of the overall revenue for the telecommunications firm last year, from the 4.6 million customers as at March 2011. 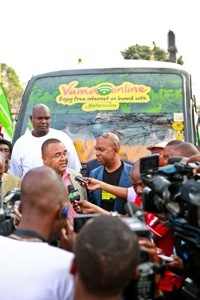 A Loyal Customer's Perspective On 5 Things That Kenya Airways Could Fix Immediately To Regain Former Glory.