Mobile as media – Why it will change everything about marketing in Kenya, and the rest of Africa.

Its been roughly 3 months since I joined InMobi as Sales Director for Africa. InMobi is the leading independent mobile ad network in the world with a reach of 0.5 billion users per month and close to 100 billion ad impressions via 12,000+ mobile web sites and mobile apps. I have to say that even though I have worked in Africa’s Internet services space for over fifteen years, the last 3 months have been HUGE in terms of learning a whole new sub-sector of digital marketing – that of mobile marketing.

In the broader context of what is happening in mobile marketing globally, Google just did its latest financial disclosures and their prediction is that they expect their mobile ads business to eventually outpace their desktop ads business at current growth rates. Its fairly obvious that the rapid uptake of of smartphones, tablets and advanced phones is leading to a whole new market for advertising services, especially via the mobile web and mobile apps. This trend is also being felt in Africa which is by far the fastest growing market for mobile in the world with currently 600+ million active mobile users – and its getting bigger everyday. In Kenya alone we have over 28 million mobile subscribers and over 7 million mobile internet users.

All of the above brings me to to the topic of this blog post. The reality is that with mobile becoming so widespread across Africa, why is advertising spend not following suit? True, traditional media channels DO have their place in a continent where the majority may still do not own mobile phones but clearly there is a need to address the mobile marketing opportunity in a far more aggressive manner. Whilst Internet adoption is also still growing in Africa and the majority of mobile users are not online, the reality is that in most African markets the mobile is often the first and only Internet capable device that users have access to. However, the mobile device is an entry point to other mobile marketing sub-channels as well. To elaborate further, the following are the 4 mobile sub-channels that one can use to market via mobile in Kenya:

In keeping with the above mobile marketing sub-channels, recent research from InMobi shows that mobile as a media has actually overtaken most traditional medias in terms of consumption in Kenya. This suggests that marketers need to start using mobile as a key media so as to leverage cost-effective marketing reach and targeting at scale on a Pan-African basis. More details on the Kenya research can be downloaded here: 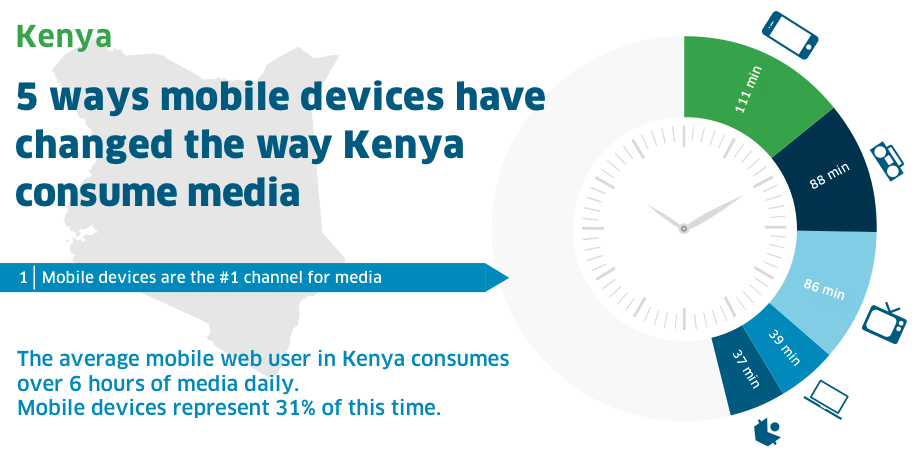 Considering mobile (web) marketing in Kenya and/or Africa? 6 things you need to know.

Mobile as media – Why it will change everything about marketing in Kenya, and the rest of Africa.