Media Madness – When a blog becomes an online community. 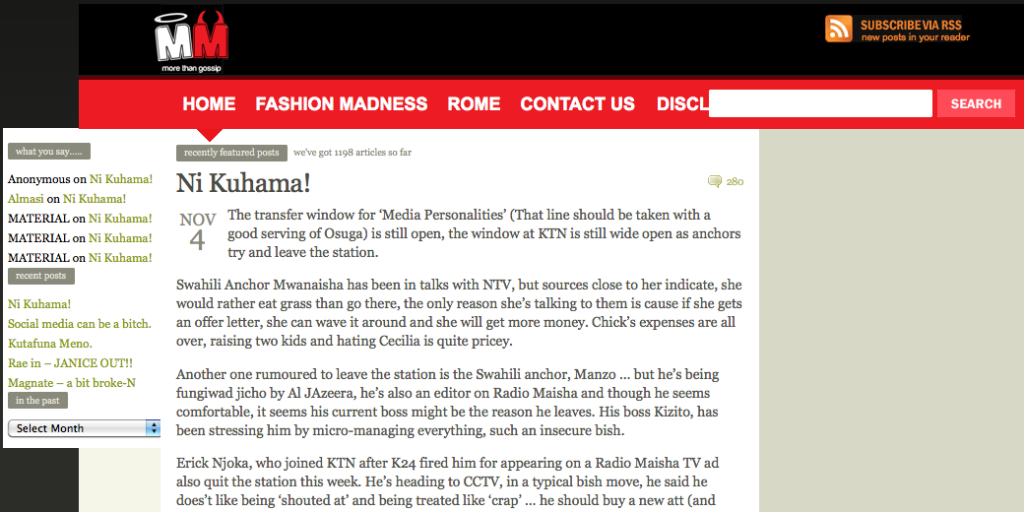 What I saw, and what I read, had me laughing to tears, and stitches. The blog posts on Media Madness were a complete riot! But what was even more entertaining was the many comments that readers would post there. It was the first blog I had seen in Kenya that regularly had over 200 comments, on daily basis! This is no mean feat and suggests that the readers are just as passionate as the bloggers on Media Madness. I also noticed that there was a consistency to the readers who came back everyday and made comments on Media Madness – it has transcended being a blog and has in fact become a vibrant online community.

I have gone back, time and again, every few weeks for a good laugh over the past year. If anything, their blog is doing even better these days and the comments just keep coming back on every blog post. The content is as candid and as witty as ever! (be warned though that profane language is liberally spread in both posts and comments). I even saw that they had sold display ads to Nivea during a recent campaign (which could be a first for a blog in Kenya with a mainstream and “blue chip” brand).

Media Madness is probably the most popular blog in Kenya since it ranks as one of the most popular web sites in Kenya as well on Alexa.com. At some point, I had gotten in touch with the people behind Media Madness and meant to do a blog post on them – that was a year or so ago. I have been busy and procrastinated. However, finally, I got them to do an interview with me on Media Madness this week. Below is what I got from them – enjoy!

MK: What is Media Madness? When did it start?

MM: Media Madness is a community of bloggers who come together to USUALLY discuss what is put up on a daily basis (They don’t have to discuss what’s put up, it’s your choice). The site started in August 2009 at a joke as we drove to the airport.

MK: What makes it so popular since it’s probably Kenya’s leading blog?

MM: CONTENT! MM is updated on every weekday, it rarely veers off its personality (Bitchy, rough, funny, a swift kicker in the nuts). Plus Gossip and ‘inside scoops’ are PRIME topics in the digital space.

MK: Who is behind Media Madness? Tell us more about your content. How do you promote it?

MM: The site is run by College going guys and young entrepreneurs. The writers change a lot but the ‘Brand Voice’ (Don’t laugh, we killed brain cells trying to define the brand voice) doesn’t change. It’s a nice mix. We love it! The site is largely spread through word of mouth, but one of our admins uses his/her Twitter account to push the day’s post online. We did use Google once and it paid off BIG TIME! (I wasn’t paid to say that btw)

MK: We heard that someone or a company recently invested in Media Madness? Can you tell us more about it?

MM: The deal is covered by a very tight NDA but the little that we are allowed to squeal about is that the firm will plug in expertise that will see us monetize better and diversify the content offering. And yes, there was some infusion of capital that will make this possible.

MK: Who reads Media Madness? We have noticed that each blog post gets over 200 comments a day. This is HUGE for Kenya. Do tell?

MM: We really can’t tell who is who !!! As we ENCOURAGE our users to be anonymous (Communities thrive when everyone is ‘in the dark’) … plus the ease in which you can leave comments. There are several ‘Commentators’ on the site who’ve carved out a niche for themselves and are seen on a regular basis. They’ve even started leading discussion (which we don’t mind) plus sometimes it’s a mess and more entertaining on the comments section, it sometimes REFLECTS the society we live in, as some of the comments are quite eeer enlightening.

MM: It had to happen; it’s the same people coming every day to a site where their comments are not moderated (Unless they go against our legal line). They form a community; it’s a ritual for them. It’s part of their social network, we allow them to be anything on the platform but allowing and encouraging free discussions.

MK: Is Media Madness making money? We saw some Nivea Ads not too long ago. How did this go?

MM: Yes, we’ve made money … we’ve tried a few banner ads. But sometimes, we have to turn away some people. Those that come in and first ask for specific posts to be taken down (This is not your grandfather’s thingira) *shaking a mwiko*

MK: What are the long term plans for Media Madness? It seems like you have a blog that could be profitable going forward – a first in Kenya perhaps?

MM: We are looking to grow our readership more and diversify our content to include other verticals of interest. Brands come where conversations happen and we happen to be one of those places where we have conversations happening on a daily basis. So in the coming year we will engage more with brands looking to push their product a bit different

MK: What keeps you going with Media Madness? Where does the obvious passion come from?

MM: Hahaha we still can’t explain that and it’s not that we have free time, we must be the busiest ‘Teens’ in town. For me (Bitch Fest writer) I guess I use the site as a ‘release’ mechanism. It helps me forget about the a million and one projects I’m working on and for a few minutes I’m a total bitch!

MM: Build it, and they will come. All bloggers should keep this to mind, MM started as a joke (and shit grammar, which sometimes it still has) but we have a few thousand eyeballs. Also, get paid for doing what you love. Also, know your genre … okay I need to stop! Cool warus!!

NOTE: Media Madness can currently be found at frankierants.com but will be moving to mm.co.ke next week.

Media Madness – When a blog becomes an online community.