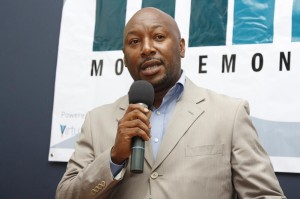 Samsung Electronics gave Mobile Application Developers a glimpse of how their income can be generated in the future if they are one of the five winners of the Samsung Apps Developers Contest. Mr Robert Ngeru, Samsung Kenya’s Deputy Managing Director challenged Developers at a meeting at iHub to come up with local apps to that would meet the needs of Kenyans.

Samsungâ€™s growth in Kenya’s mobile sector doubled from 11% to 22% in one year and the results were achieved through heavy investments in Marketing, Research and Development, Distributor, Dealer and Operator Partnerships. While Samsungâ€™s focus in the mobile sector is the development of mobile phones and accessories, he expressed the desire for Samsung to market local apps created by local mobile app developers for Kenyans. 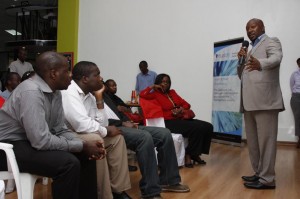 About two weeks ago, Samsung announced its Samsung Apps Developers Challenge in which app developers would be given 6 weeks to submit their designs to local apps on the Bada platform. 5 winners would be selected who would win ksh 200,000 each, a Samsung wave phone and an opportunity to benefit from revenues generated from their apps once it is made available on all Bada platform phones.Â  Once the entries were submitted, Samsung would go through a process of customizing the apps and the winning designs would be awarded. The results would be published in January and the winning apps made available on all Bada Platform phones. To address the concerns of the premium pricing of the Samsung Wave phone Mr Ngeru announced that there are already more affordable Samsung Bada phones available in the market-the Samsung Wave 525 at Ksk 15,000.00, Samsung Wave 533 at Ksh 16,500.00 and the Samsung Wave 723 at Ksh 22,000.00.

With the integration of local payment solutions the content that is developed would benefit from revenue streams generated from users. Mr Ngeru said the revenue generated would go solely to the developer less any operator charges that may apply. The apps would be launched on the global Samsung Apps store and driven for free to build awareness and usage. Miss Tessa Calleb, the Marketing Manager for mobile promised the support of a robust marketing budget to drive awareness and usage of the winning apps. With the introduction of subscriptions once the apps has gained popularity, the revenue would go directly to the developer. Developers were directed to the Samsung Apps store (www.samsungapps.com) to see what is available that can help generate ideas. The deadline for submissions is 16th December 2010 and for more information on how to submit entries for the challenge visit www.samsungkenyaappscontest.com

Samsung Real Dreams Reaches out to Kawangware Residents in Nairobi

Airtel launches new global brand across its operations in Africa.